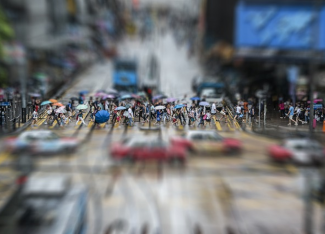 Modern day foreign earned income exclusion has its origin in 1926, when Congress enacted its predecessor as part of a strategy to help American businesses expand overseas by incentivizing Americans to work and live abroad.[1] The exclusion is still the best-known, although sometimes misunderstood, tax benefit available exclusively to U.S. expatriates.

One of the most common misconceptions about foreign earned income exclusion is that there is no need or urgency to file a U.S. tax return if the taxpayer's compensation can be fully excluded by the foreign earned income exclusion. This cannot be further from the truth. In fact, the exclusion is only allowable by elections that must be made either with the original or an amended federal income tax return for the first tax year the election is to be effective. An election once made remains in effect for that year and all subsequent years unless revoked.[2] Taxpayers who do not file a return or follow the prescribed regulatory procedures for late election could become ineligible for the election and liable for tax on compensation that could otherwise be excluded.[3]

The Good News and the Bad News

We always prefer to start with the good news: Qualified individuals may separately elect to exclude from gross income the following:

While the housing cost amount is standard for most locations, the statute authorizes the Treasury Secretary to adjust the limitation for specific locations based on geographic differences in housing costs relative to those in the United States.[4] The annual update for tax year 2020 was published by the Treasury Department and the Internal Revenue Service (IRS) in Notice 2020-13. In this year’s update, there are 33 entries with increases, 119 entries with no changes, and 99 entries with decreases. Hong Kong continues to retain its title as the location with the highest housing cost amount. See Tables 2 and 3 below for the limits applicable to selected locations. 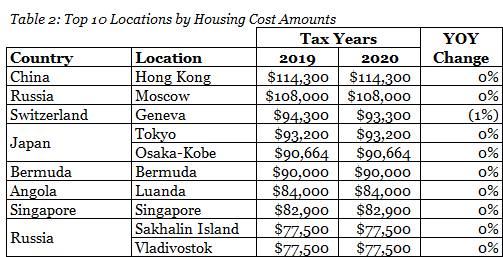 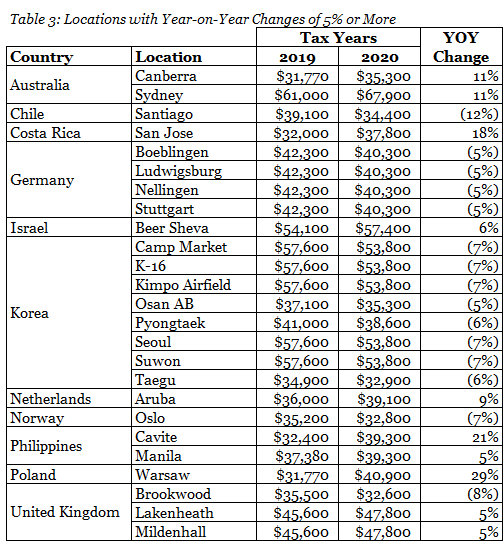 This means expatriates can potentially exclude a substantial amount of their compensation from taxation. What is the bad news then, you might ask? The bad news came when the Tax Increase Prevention and Reconciliation Act of 2005 (TIPRA) was enacted.

One of the most significant impact of TIPRA was that, effective tax year 2006, any foreign earned income exclusion allowed on the return must be taken into account as if the taxpayer had not elected the exclusion in determining the rates at which any income should be subject to tax. Many expatriates still mistakenly believe that the taxable income as shown on the return is subject to tax at the lowest brackets.

In practice, this does not affect expatriates whose compensation and other income can be fully eradicated by the foreign earned income exclusion and standard deduction or itemized deductions. For others, the remaining income will be subject to tax at higher marginal tax rates. But this piece of news is not half as bad as it sounds when you compare the resulting tax burden against that of a domestic employee, all else being equal.

How to Qualify for Foreign Earned Income Exclusion

To be a “qualified individual” eligible for the foreign earned income exclusion, you must have a “tax home” in a foreign country and are:[5]

The term “tax home” has the same meaning as it relates to traveling expenses while away from home. You may have a foreign tax home if your work is in a foreign country and you expect to be employed in the foreign country for an indefinite, rather than temporary, period of time[7]:

You do not have a foreign tax home if your abode remains in the United States (where you keep closer familial, economic, and personal ties) unless you work in a Presidentially-declared combat zone in support of the Armed Forces of the United States.[8]

What If I Had to be Evacuated to the United States Unexpectedly Due to Adverse Conditions?

Congress recognizes taxpayers may be required to leave the foreign country before meeting the minimum time requirements (under Bona Fide Residence Test or Physical Presence Test) for foreign earned income exclusion due to war, civil unrest, or similar adverse conditions. The statute, therefore, provides that a taxpayer will be treated as a “qualified individual” if the following conditions are satisfied:[9]

Historically, revenue procedures are issued by the IRS each year to list the countries to which the waiver of minimum time requirements because of war, civil unrest, or similar adverse conditions will apply.

For tax year 2019, the first list of countries, unrelated to COVID-19, was published in Rev. Proc. 2020-14 as part of the annual process. Rev. Proc. 2020-27 was subsequently issued as a result of evolving developments regarding the COVID-19 pandemic. See Table 4 for a summary of the countries and periods covered by these revenue procedures:

These waivers are country and date specific. Taxpayer relying on the waiver must have:

For example, for the waiver in relation to China to apply, the taxpayer must have established residency or been physically present in China on or before December 1, 2019. Taxpayers whose residency or presence in China started on or after December 2, 2019 will not be eligible for the waiver.

Effect of Waiver: Ms. Day would be a qualified individual for 2020 with respect to the periods between January 1 through March 1, 2020, and August 25 through December 31, 2020, assuming she has met the other requirements to qualify for foreign earned income exclusion.

It should be noted that inclusion of income and credit for foreign taxes inconsistent with election(s) previously made for foreign earned income exclusion and/or foreign housing cost amount constitute revocation of the relevant election(s).[12] Such a revocation will render a taxpayer ineligible to make the same election(s) until the 6th year following the tax year for which the revocation was first effective.[13]

For example, if you had elected to exclude your foreign earned income and housing cost amount on a prior year return and decide to forego these exclusions on your 2019 return in order to claim foreign tax credit in full, you will be considered to have revoked those elections. As a result of the revocation, you will not be eligible to make another election for foreign earned income exclusion or housing cost amount until tax year 2025.

Treasury regulations, nevertheless, provide that a taxpayer wishing to re-elect the same exclusion before the 6th year after the revocation may apply for consent to do so by requesting a ruling from the Associate Chief Counsel of the IRS.[14] In deciding whether to give approval, the IRS will consider any facts and circumstances that may be relevant. Since requesting a ruling can be complex and the IRS will charge a fee for issuing these rulings, you may need professional help.

In conclusion, decisions to elect for or change the use of foreign earned income exclusion and foreign tax credit should be made only after careful planning and analysis.