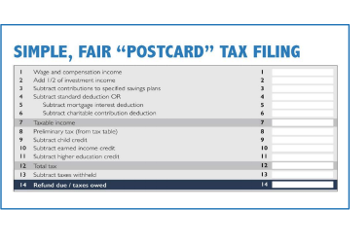 The Ways and Means Committee has published details of the Tax Cuts and Jobs Act (H.R. 1) that is scheduled for markup beginning November 6, 2017.  There are likely to be changes as it makes its way through the Congress and the exact impacts may only be known once the legislation is finalized, notwithstanding the political hurdles that need to be overcome.  The tax plan will clearly not create the kind of “postcard” tax return touted by the GOP but is being promoted as a first attempt to simplify a complicated tax code and make it fairer to all.  While the Congress deliberates on the legislation, we take a first look at the GOP tax plan and highlight some provisions that may be of key interest to U.S. expatriates.  Expatriates who are concerned about the potential tax implications of the proposed changes should consult their tax advisors and consider accelerating or postponing certain transactions based on their personal circumstances.

Consolidation from 7 to 4 Tax Brackets:

There has been much debate about the progressive tax system in existence.  With the proposal to reduce the number of tax brackets from 7 to 4 and index the income levels of these brackets for chained CPI, the question is how the changes in tax rates and the width of each bracket could affect your liabilities.  Summarized below are a comparison of the tax brackets, the estimated tax impacts, and our initial observations –

Maximum rates for long-term capital gains and qualified dividends would be realigned with the new tax rates.  It appears, however, that the thresholds are misstated in the tax bill.

The Alternative Minimum Tax (AMT), a complex alternative tax system originally designed to ensure wealthy taxpayers who may otherwise exploit various deductions would pay a minimum amount of income tax but has since affected about 4.5 million families, would be repealed.  If a taxpayer has AMT credit carryforwards, the taxpayer would be able to claim a refund of 50% of the remaining credits (to the extent the credits exceed regular tax for the year) in tax years beginning in 2019, 2020, and 2021.  Taxpayers would be able to claim a refund of all remaining credits in the tax year beginning in 2022.

The exercise of incentive stock options (ISO) has been one of the most common reasons why expatriates were subject to AMT, having to recognize income, usually before any is realized, and pay AMT.  This should no longer be relevant after the repeal.

Expatriates who had paid AMT on “preference items,” such as ISO, which cause merely timing difference in income recognition, should continue to keep track of their AMT for the purpose of claiming Minimum Tax Credit (MTC).

Consistent with the tax reform framework drawn up by the “Big Six” in late September, the maximum tax rate for business income of small and family-owned businesses conducted as sole proprietorships, partnerships and S-corporations would be limited to 25%.  Since the objective of this provision is to provide a tax concession for return on capital investments but to prevent wealthy taxpayers from avoiding higher tax rates by recharacterizing their personal income, clear distinctions are made between labor and capital share of business income –

“Net business income” would also exclude certain types of income derived from such business activities, which would retain their respective characters and be subject to tax separately.

Expatriates who own or plan to start non-per se corporations outside the U.S. should review how “check-the-box” election of foreign eligible entity may impact their overall tax liabilities in light of the tax plan.  Where capital is a material income producing factor of the trade or business, expatriates should also note that there would be no change to the allowance of up to 30% in net profits that may be deemed compensation for the purpose of foreign earned income exclusion.

Enhancement of Standard Deduction and Repeal of Personal Exemptions:

Child tax credit would be increased by $600 to $1,600 per child.  The initial limit of $1,000 for refundable credit per child would be indexed to chained CPI and, over time, rise to match (but not exceed) the $1,600 base child tax credit.  In addition, a non-refundable family tax credit of $300, which is scheduled to sunset after 2022, would be provided for the taxpayer, the spouse in the case of a joint return, and each dependent who is not qualifying child.  These credits are subject to phaseout based on modified adjusted gross income, the thresholds of which would be adjusted to eliminate marriage penalty and increased to allow more families to benefit from these credits –

The increases in child tax credit and thresholds for phaseout are, indeed, welcome news as more expatriates should be able to benefit from the credit.  For those whose dependents are not qualifying children, however, the new family tax credit of $300 per person might not quite make up for the loss of personal exemption(s), even at 25% (above which the credit would be fully phased out for an average family).

Simplification and Reform of Deductions:

Many of the familiar deductions would be repealed.  It is anticipated that these changes would result in fewer than 10% of the taxpayers choosing to itemize their deductions, compared to about 33% today –

Alimony payments would not be deductible by the payor.  By the same token, neither would alimony payments be includible in the income of the payee.  These changes would apply to –

Under existing law, alimony payments includible in the recipient’s gross income are deemed “compensation” for the purpose of IRA contributions.  Expatriates planning to contribute to IRA with alimony payments should note that such treatment would no longer apply, with the update of code sections related to alimony payments, and consider other options in the event their divorce decrees or separation agreements are affected by this provision.

Expatriates who plan to relocate for employment/assignment overseas or are in the process of negotiating the terms of their relocation/assignment should consider the tax implications of these changes.

Grandfathered Indebtedness Incurred On or Before November 2, 2017

Exception for Written Binding Contract Entered Into Before November 2, 2017

The related indebtedness would be treated as being incurred prior to November 2, 2017 if the following conditions are met –

Expatriates who have entered into a binding contract before November 2, 2017 to close on the purchase of a principal residence by December 31, 2017 should ensure the purchase does take place no later than March 31, 2018 in order for the exception to apply.  Expatriates planning to purchase a home, especially in locations known for high housing prices, such as Hong Kong, Singapore, and London, would likely see the deduction of their mortgage interest limited and their ability to itemize deductions hampered, depending on the structure of the loan and rate of interest.

Deductions for state and local real property taxes would still be allowed but limited to $10,000 ($5,000 for MFS).  State and local income or sales taxes as well as personal property taxes, on the other hand, would no longer be deductible, unless paid or accrued in carrying on a trade or business or for the producing income.

It appears that foreign real property taxes would not be deductible, unless paid or accrued in carrying on a trade or business or for the production of income; if this is confirmed, expatriates who purchased personal residence overseas would lose the ability to deduct foreign real property taxes they pay on these properties.  On the other hand, language of the tax bill does not seem to exclude the deduction of foreign income tax, which may be taken in lieu of foreign tax credit.

Simplification and Reform of Exclusions and Taxable Compensation:

(A) Limitation on Exclusion for Employer-Provided Housing

The exclusion for housing provided for the convenience of the employer and for employees of educational institutions would be limited to $50,000 ($25,000 for MFS).  Such exclusion, when provided to “highly compensated employees” (with compensation in excess of $120,000 for 2018, as adjusted for inflation), would also be subject to phaseout.

The tax bill does not contain language about how any such housing costs in excess of the exclusion limits may or may not be eligible for foreign housing exclusion.  One possibility would be to take into account the difference between the exclusion limits under this provision and the geographical limits updated by the IRS annually for foreign housing exclusion.  Expatriates living in employer-provided camp housing, which is a common arrangement in countries such as Saudi Arabia, should continue to monitor the development.  Even if the cost of camp housing becomes eligible for foreign housing exclusion, expatriates, whose compensation exceeds the limit for foreign earned income exclusion, may incur a higher tax liability than under current law because the base housing amount ($16,656 for 2018) is not excludable and as a result of the stacking rule, which may put them in a higher tax bracket.

(B) Exclusion of Gain from Sale of a Principal Residence

Expatriates who have not used their homes in the U.S. for some years due to their assignment/employment overseas and were relying on the 2 out of 5 year rule under current law to maximize their excludable gain may now need to reconsider their plan in the event this provision is enacted.  High-income expatriates with impending transactions in which substantial income would be recognized (e.g. stock  option exercise, bonus payment, sell of stocks, etc.) should also consider the timing of such transactions relative to the closing of their home sale.

Simplification and Reform of Education Incentives:

The Lifetime Learning Credit (LLC) will be consolidated into an enhanced American Opportunity Tax Credit (AOTC).  Unlike LLC under current law, however, the enhanced AOTC may only be claimed for the first 5 years of post-secondary education at an eligible educational institution and the credit for the fifth year would only be at half the rate (as the first four years), with up to $500 of such credit being refundable.

No new contributions to Coverdell education savings accounts would be allowed after 2017 (except rollover contributions) but tax-free rollovers from Coverdell accounts into section 529 plans would be allowed.  On the other hand, elementary and high school expenses of up to $10,000 per year would be considered qualified expenses for section 529 plans.  Qualified expenses would also be expanded to cover expenses associated with apprenticeship programs.

Repeal of Other Provisions Related to Education:

The following deductions and exclusions related to education would be repealed –

The estate and generation-skipping taxes would be repealed for estates of decedents dying after 2023.  Beneficiaries would, however, still receive a stepped-up basis in estate property inherited.

The estate tax basic exclusion amount would be doubled from $5 million (as of 2011) to $10 million and indexed for inflation, effective for tax years beginning after 2017.

Expatriates who are not U.S. citizens and those with non-U.S. citizen spouses, nevertheless, would see no additional reprieve.